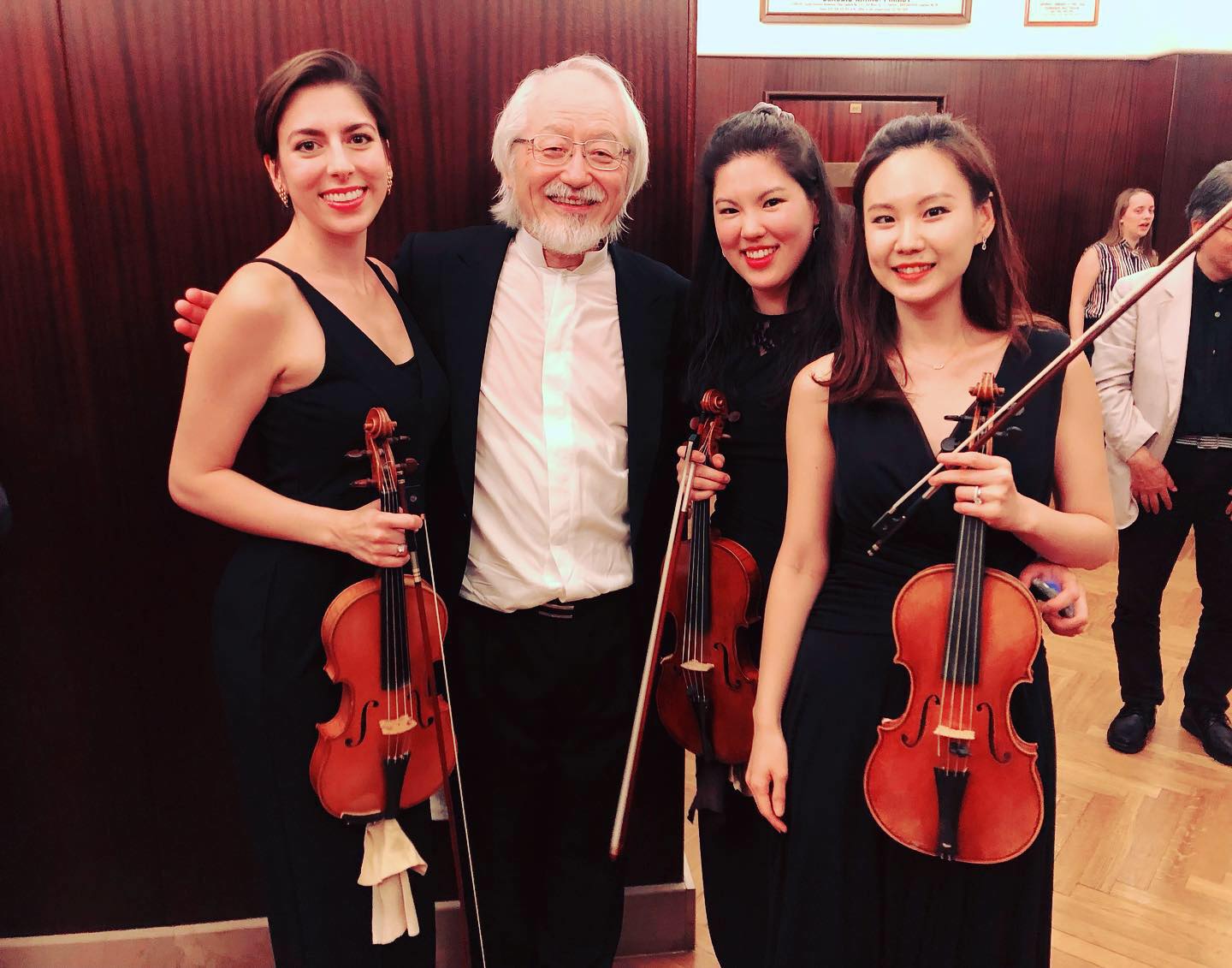 Three alumni from the Historical Performance Department at The Juilliard School, Rachell Ellen Wong, Alana Youssefian, and Isabelle Seula Lee joined BCJ’s Warsaw tour this summer. They told us what their experiences performing on tour was like. Please enjoy the interview!

Did you know about the Chopin and his Europe festival before going to Warsaw? What were your impressions of the festival?

I didn’t know much about the Chopin’s festival and that it was internationally well-known annual event. When I found out, I was super excited to be part of it, to play our program and Chopin for first time on gut strings at his home country, Poland. (Isabelle)

I had heard about the festival only by name so I was excited to see first hand what it would be like. I thought the festival had a great variety of fantastic artists! It was wonderful to see so many historically informed groups and soloists as well. You can really see they care deeply about how the music is being played and represented. Everyone who was on staff at the festival was extremely nice too. (Rachell)

I didn’t know about the festival before going on this trip, but I wish I had known about it sooner! I was so impressed by the lineup of concerts, especially the number of international groups present at the festival. A lot of music festivals can seem pretty insular, but the Chopin festival brought together many of not only the finest orchestras in Poland, but also the world. (Alana)

At Juilliard, you’ve all mostly worked with Masaaki on baroque projects. What was it like performing Beethoven, Mendelssohn, and Chopin with him?

I’ve worked with Masaaki for several years, and I have always admired his musicianship as I learned something new every time. He is also a huge source of inspiration to me. I mostly had Bach or Handel projects with him, except for last year’s BCJ concert when we performed Mendelssohn’s Elijah, which was an amazing experience as well.

Working with him beyond baroque music is equally inspiring and important learning experience. Thanks to maestro Masaaki, I was able to enhance my understandings of how to use my baroque skills combined with modern technique in the orchestral setting, in the way it helps this kind of music speak its language. (Isabelle)

I love the way Masaaki approaches a piece – it doesn’t matter what period it is from, he just wants to be as true to the music as he can while also adding his own vision of the piece. It is always magical to get to listen and also be a part of the music when he is leading. I love that he takes risks as well, especially in performance, because to me music without a little risk is boring. Life isn’t always planned so why should the music? I also just felt grateful that I was up there on stage with everyone in the orchestra and Masaaki playing later repertoire. We don’t get as many chances to delve into later repertoire this way. (Rachell)

It was such a wonderful experience getting to work on Romantic repertoire with Masaaki. He puts the same fine attention to detail that you hear in his Bach into these pieces. This was my first time playing with such a big orchestra for BCJ, but it still felt as fresh and vibrant as the smaller chamber orchestra projects I have done with Masaaki. (Alana)

What was your favorite piece or program that you performed with BCJ on this trip?

I enjoyed the whole program, but performing Mendelssohn’s “A Midsummer Night’s Dream” was particularly memorable. I found a lot more new details playing it on period instruments, which was very rewarding. And with Suzuki’s imaginative interpretation, it was a very joyful experience as the piece itself. (Isabelle)

I really enjoyed playing the Mendelssohn Italian Symphony and Beethoven Symphony no. 2. I’ve only ever gotten to play these pieces in modern orchestras but finally getting to play them on a violin with gut strings and a period bow (not to mention all the other historical instruments as well) made a huge difference. I also feel Beethoven’s 2nd symphony is so underplayed compared to the rest of his symphonies. I love the sound that Maestro Suzuki creates with the orchestra. This kind of sound doesn’t exist without these sorts of instruments. I love getting to imagine that we are closer to what the composer really would have heard. I was also sitting in front of the timpani and I enjoyed the occasional blast of sound. I sometimes felt like I was at a rock concert. It was awesome. (Rachell)

Mendelssohn’s “Italian” Symphony has always been one of my favorite pieces, even though I had never performed it before. I was so happy that my first time playing it was with BCJ! I also really enjoyed playing the Chopin piano concerti, but that was mostly because I loved listening to the fabulous soloists. (Alana)

What was the best non-musical part of your trip?

I really enjoyed exploring Warsaw on the electric scooters and eating pierogis, and running through the huge parks that surrounded our hotel.
I also enjoyed getting to know my colleagues and friends better – sometimes knowing people at school means you don’t really have the time to really get to know one another, and I felt this trip I made lasting friends who have the same interests and that’s very exciting for me! (Isabelle)

One more thing- the breakfast at the hotel was wonderful. Actually the entire hotel was super nice. What a luxury! (Rachell)

I had a blast sharing meals with members of BCJ, and exploring the city with Rachell and Seula. I think my favorite part was riding electric scooters across the city. I didn’t even fall once!! (Alana)

What was it like working with the members of BCJ?

Everyone is so nice! I love how welcoming everyone is. Plus everyone is an amazing musician, so playing together is very satisfying. (Rachell)

I had worked with some members of the orchestra on the US/Canada tour last November and December, so it was nice to be working with old friends again. Even with most of the orchestra members I hadn’t met before there was some connection through other musicians we knew around the world or places we had performed. BCJ is such a welcoming group of musicians, so it’s very easy to join right in. (Alana)

Any funny backstage stories from your trip?

The hotel pool was super nice, so we decided that since Seula never learned how to swim, it would be fun to see if using a pool noodle and flippers would help her. It worked! I thought she was very brave to try and figure it out by just jumping in! (Rachell)

One of the great parts of this trip was exploring Polish cuisine, going to different restaurants and sharing these enjoyable moments with BCJ musicians. I loved how food, apart from the music making, connects people closely as we share something we both like!
BCJ is one of my favorite groups. I feel so grateful to get to know and to work with group of musicians that I admire. They were also very open and welcoming on and off the stage, which left me a great impression and made the trip more enjoyable. (Isabelle)

Luckily nothing embarrassing happened backstage (that I saw!), but it’s always funny being backstage with the first violin section. We had a few tricky spots in both programs so all of us made quite a racket getting in our last-minute practice sessions right before going on stage! (Alana)